June 26, 2018
The 2018 Korean drama “My Ajusshi” is simply a masterpiece.  Although we have loved the lighthearted romantic comedies such as “I Am Not a Robot” and “Pinocchio” since becoming acquainted with Korean dramas, this somewhat darker drama is so wonderfully satisfying that it has now become our favorite.  Beautifully written, produced, acted and directed, and with a fine musical score, “My Ajusshi” [My Mister] is the gripping story of two people whose lives seem to be hopelessly miserable, but whose growing bond eases their loneliness and encourages their hearts. Though springing from a Buddhist worldview rather than Christian, this absorbing story has very thought-provoking insights into the human condition, and far more than any Hollywood movie I can think of.  In fact, I am now convinced that Korean dramas are far more Christian-friendly than about anything from Hollywood. My Ajusshi was a sixteen hour investment, but I found it so rewarding that I even watched it twice! The drama gives a lot to ponder.  How can we best repay our loved ones for all they do for us?  By living a happy life?  What about our personal trials?  Is noble self-sacrifice sometimes pointless?  What about non-sexual intimacy?  Can a deep understanding of someone help them heal?

Over the years, any enjoyment I have had in American entertainment has been depleted. Hollywood has assumed such an aggressively atheistic and anti-Christian Humanist worldview that there is no longer any fun in it.  Science fiction/ outer space adventures like Star Wars and Jurassic Park still give a little excitement, but the action movies and romantic comedies that I hoped would provide some relief from the usually dismal world news have been very disappointing: they seem little more than graphic violence interspersed with immoral and distasteful bedroom romps.  In fact, they have become painful.  That is why I was fascinated to first discover Bollywood, with its refreshing innocence.  Indian movies such as “Jab We Met,” “Three Idiots”, and “Bodyguard” were great, I thought.  Recently, however, my wife exposed me to Korean dramas, and I have became hooked.  In these productions, the "skinship" of a touch of a hand is highly romantic, and a simple kiss on the lips by the true lovers is the satisfying climax of the drama.  There is sometimes potty humor, but it is different, and amusing.  While I continue to look for wonderful Christian movies such as “Facing the Giants,” and enjoy some rare Hollywood movies like “The Finest Hours” which are not specifically anti-Christian, the vast output of American entertainment seems to me very bleak, and an unpleasant waste of time.

But what does all this have to do with Noah’s Boys in the City of Mother Earth, or the upcoming novel Noah’s Boys and the Jewel of Havilah?  For me, entertainment highlights the overwhelming importance of our presuppositional worldview. The Christian (or in the case of Noah's Boys, Antediluvian Christian) worldview accepts the understanding that our Creator made all of Creation for His own Good Pleasure, including us, and that He considers each human being of great intrinsic value.  Each of us has a distinctive Purpose and Mission in life, and God has promised a great reward for those who stay true to that high, noble purpose, or even those who return to it after being lost a long time.  And the Christian worldview offers enjoyment, romance, and adventure in real life, just as we see in the classic works of fiction springing from the Christian worldview.  In Secular Humanism, however, the depressing major worldview that dominates “higher” education and the media in America, individual people have no purpose or meaning at all. The best we can hope for, according to this politically-correct worldview, is “survival of the human species”, as was seen in the popular movie “Independence Day.” But where is the high adventure in that? Can we even call it “true to life”? Nothing is absolutely “true” according to the Humanist worldview.  Instead, “everything is relative.” No, the Secular Humanist worldview, with its accompanying atheistic Darwinian evolution, is completely bankrupt morally.  Its dominance in America has brought us nothing but grief and death.  It has nothing to offer, and it is not even fun.

However, I am happy to watch entertainment from other worldviews, including “My Ajusshi,” a drama which, by the way, is not anti-Christian at all.  While only the Bible is absolutely true, and only Jesus saves, God has given even non-Christians some valuable insights into human nature. That is why we can find pleasure and refreshment in Korean drama, as well as in overtly Christian worldview books like Noah’s Boys in the City of Mother Earth. 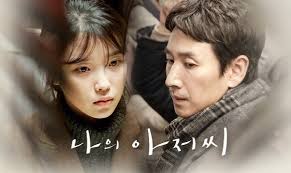