Showing posts from September, 2019
Show all

We had another health crisis in the family recently.   The man who was husband, father, and Grandpa had a heart attack.   Phone calls buzzed between parents, siblings, and children about serious things—truly matters of life and death.   But it is amazing how often we laughed and recalled other times when coping skills and faith were tested—like on Grandma H’s Funeral Day.             She had died swiftly, almost without pain and with one of the greatest exit lines ever.   She admitted to being 85 but was actually 88-- or so, as records of her birth burned with the courthouse years before.   Grandma, while never really sick, “enjoyed” ill health—not with moans or groans, but with expressive sighs for every occasion.   On the day she died, she had baked her famous chocolate potato torte.   Her last action before going to the hospital was turning off the oven.   Less than an hour later, in the small county hospital, she took her husband’s hand in the same way she had for
Post a Comment
Read more 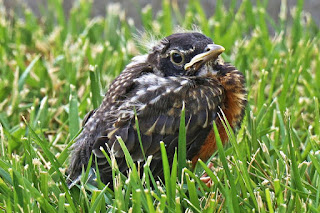 Years ago, when my sons were young, we had a wild, scary spring storm.   Power lines were downed, tree limbs scattered, and early gardens flattened by hail.   The morning following was sunny and calm as we emerged from the house to view the damage.   Suddenly, one of the boys came running to me, smiling widely, cradling something small in his hands.   “Can we keep him, Please , can we keep him?”   A newly feathered Baby Robin looked up at me.   “Better dig him some fresh worms.   I’ll fix a basket,” I said, and Castaway became a member of the Family. In and among fallen branches, shreds of a bird’s nest and two crushed nestlings had been found.   We neither saw nor heard from worried Robin parents.   The adoption of the baby was a Necessity.   Almost immediately he accepted bits of food.   He seemed unafraid and welcomed us, particularly “His founding father.”   He peeped, opened his rather big beak and fluttered his stubby wings.   That first day, he demanded
2 comments
Read more

Being a Mother was a position I looked forward to for years.   I was the younger child in the family, and the youngest, by far, in my whole “cousinship”; so I had almost no association with anyone smaller than myself.   My neighbors had tiny relatives who visited on occasions and captivated me—entirely.   They were cuter and much more fun than the kittens and puppies I knew, so I always volunteered to push them in their buggies or rock them to sleep.   Those offers were seldom refused as they usually arrived sticky and cranky after sitting for hours in the un-air conditioned sedans of our youth. When I had children of my own, I encouraged them to bring friends to our house to play, and young guests at meal times, after school and overnight were no rarities.   We moved frequently in our early married life and our two older sons did not participate in Cub Scouts, but when we moved to Indianapolis they joined the Boy Scouts.   The Cub Scout troop had just graduated into t
Post a Comment
Read more
More posts