The Deluge Story in Stone: A Scientific Classic!


The Deluge Story in Stone by Byron C. Nelson is a marvelous classic work on the history of geology, and it is both illuminating and enjoyable.  I highly recommend it to any scientifically-minded Christian, but it would be of value to anyone willing to question orthodox old-earth uniformitarianism.  Published in 1931--88 years ago--the book is amazingly relevant today.  It is filled with eye-opening scientific observations that point back to a violent worldwide cataclysm, and which directly contradict the assumptions of old-earth uniformitarianism.   The importance of this debate in 2019, of course, has to do with the origin and meaning of life itself.  If men and women are simply the chance result of “billions and billions” of years of godless evolution, then the Bible is just a made-up story, and there is not much hope for us.  If the biblical account is true, however, then man was designed by God on purpose, and life has meaning.

Like most of us, the author was trained to accept evolution and its necessary antecedent, old-earth uniformitarianism.  When he began to question that, it led him into an extensive personal study on geology.  The short ten chapters of the book review the scientific thinking on earth’s geology from the time of Philo (15 B.C.) to about 1930, and are filled with scientific observations that demonstrate why Noah’s Flood was accepted as the most reasonable explanation for the miles of sedimentary rock strata that cover the earth and make up its geologic features.  I thought the observations on fossil beds made the book especially hard to put down.  Did you know, for example, that throughout the plains of Siberia, fossilized elephant tusks are found in such abundance that ivory-mining has been a business since 900 A.D.?  Did you know that in Sicily, fossilized hippopotami bones are found in such vast numbers that they have long been used to make lamp-black?  Over the past several hundred years, there have been many studies on “animal burial grounds.”  For example, there is a chalk cliff in Tuscany overhanging the sea that is renowned for its layers of fossilized rhinoceros, elephant, hyena, and hippopotamus bones.  The various chapters of the book detailed many observations over the centuries from every area of the globe, findings that are not consistent with uniformitarian geologic theory.  Instead, these findings provide support for the flood theory.

The chapters on coal (6) and petroleum (7) were particularly interesting.  It has long been known that coal was formed of compressed timber deposits, but geologists in the 1800’s actually made calculations: a forty-feet thick seam of coal would have required at least two hundred feet of timber.  Such a coal seam must have required a vast floating raft of timber, which itself could only have happened from a cataclysmic destruction of forests.  This floating mat of vegetation must have somehow been laid down, and then covered with such heavy layers of sediment that logs were compressed into coal, and other vegetation, depending on local conditions, formed into petroleum.  The obvious explanation, of course, is a cataclysmic flood.

There is so much to say about this book!  Even the appendices are interesting, for they detail the various flood myths from native cultures around the world.  All of them have similarities to the biblical flood account.  The main value of the volume may be in tracing the centuries of geologic findings that point to a worldwide flood.  Chapter nine discusses the reason for the decline of the flood geology model and its replacement with “modern geology”, which is dominated by old-earth uniformitarianism and is consistent with atheistic naturalistic evolution.  The real reason for this replacement is not a scientific one: the catastrophic biblical flood model actually fits the scientific findings better.  The author points out the true reason. “It is a disregard for God and the sacred record of his acts, and nothing else, which has caused the discard of the Flood theory to take place.” (page 137)

I am indebted to my good friend Larry Lawrence for sharing this important classic with me!  Dr. Henry M. Morris, by the way, the father of modern scientific creationism, credited this book as foundational to his own studies, and had the book reprinted in 1968, the same year he published The Genesis Flood.  The book is long out of print, but I was able to buy a copy through Abe Used Books.  It is a wonderful source book, and reading it is time well spent. 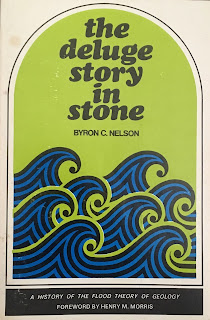