Japheth’s Stream Pump is featured in Noah’s Boys in the City of Mother Earth, and is a pump powered by the flow of the stream itself.  Whether or not Japheth was its original first inventor, his pump seems to have been an antediluvian predecessor of the modern hydraulic ram.  His pump was based on the principle that air may be compressed like a spring, but that water is incompressible, and conducts force.
History of the Hydraulic Ram: The hydraulic ram has been named one of the 55 most important inventions in the history of the world (People’s Cyclopedia, 1879). For more than 200 years, the hydraulic ram has been a major contributor to improved health and sanitation, as well as to crop production, gardens, and landscaping. While a manually controlled form of hydraulic ram was invented in 1772 (John Whitehurst of Cheshire, England), when the inventor Joseph Montgolfier (more famed with his brother Jacques as the inventors of the hot air balloon) added a one-way valve in 1796, it made the pump self-acting, and practically a perpetual-motion machine.  The hydraulic ram quickly became popular, and by 1840 it was widely used in rural America, especially in the form of Benson’s Patent Ram.
Modern Application of the Hydraulic Ram: The hydraulic ram is widely used today as a reliable, inexpensive, and environmentally safe, way to provide clean water for livestock or operate water purification systems.  It is especially advantageous in mountainous areas, or anywhere else access to power is limited.  Hydraulic rams do not require electricity, can work continuously whenever the stream is flowing, and do not require wind or sunshine.
Commercially Available Hydraulic Rams:  These include the Fleming Hydro-Ram (www.theramcompany.com, Lowesville, VA), which was developed in 1980 by Richard Fleming. This pump requires as little as a 2-foot fall of water with a flow of 3 gallons per minute in order to pump water as high as 20 feet.  The basic design of the modern hydraulic ram, and a typical application, is seen in the illustrations below.  Other hydraulic ram manufacturers include Derkor (illustrated below, www.rampumps.net) and Gravi-chek (www.gravi-chek.com).  A quick internet search will reveal many hydraulic ram distributors, as well as books, such as Don Wilson’s All About Hydraulic Ram Pumps, and articles describing how to build your own.
The Noah’s Boys series emphasizes that man was deliberately designed to be creative.  Inventing machines and new ways to meet the many needs and problems of the world is one way to make Life an Exciting Adventure! 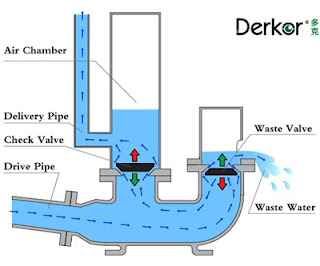