Noah: Not a Myth!

May 27, 2017
Noah was a real person whose importance in history cannot be overemphasized.  Moses, the writer of the first five books of the Bible (the Torah), believed in him, as did Jesus Christ.  If Noah was only a myth, as it is popular for academics to assert, then Moses and Jesus were both frauds, and any faith we have is pointless.
But what do we really know about Noah?  The answer is: quite a bit.  While some cite ancient Sumerian fragments of the Gilgamesh epic that seem to parallel Noah’s story, our only reliable source of knowledge on Noah is actually the Bible itself. Noah was the key character in the story of the Great Flood (Genesis chapts 5-9), and altogether his name appears in the Bible 46 times.
Noah’s Genealogy
--Noah was the tenth patriarch, and named by his father Lamech as one who would “comfort us concerning our work and the toil of our hands,” (Gen 5:29)
--Noah, his wife, his three sons (Shem, Ham, and Japheth) and their wives entered the ark: eight persons in all (Gen 7:7), along with the animals two by two.
--Noah was 600 years old when the floodwaters were on the earth, and he lived 350 years after the Flood.  He died at age 950, and was the last of the extremely old patriarchs; lifespans after the flood became far shorter, tending toward 70 years.
--Noah’s sons populated the entire earth (Gen 9:19) and its nations. (Gen 10:32)
Noah’s Moral Character
--“But Noah found grace in the eyes of the LORD.” (Gen 6:8)
--“Noah was a just man, perfect in his generations.  Noah walked with God.” (Gen 6:9)
--Noah was righteous before God (Gen 7:1); only Noah, Daniel, and Job could have been delivered because of their righteousness (Ezek 14:14, 20)
--Noah was faithful, and did according to all God commanded. (Gen 6:22, 7:5)
Work: Preacher, Builder, Savior, Grower, Father
--Noah was a “preacher of righteousness.” (2 Pet 2:5)
--Noah built an ark.  “By faith Noah, being divinely warned of things not yet seen, moved with godly fear, prepared an ark for the saving of his household, by which he condemned the world and became heir of the righteousness which is according to faith.” (Heb 11:7)  “The end of all flesh has come before Me, for the earth is filled with violence…Make yourself an ark of gopherwood…” (Gen 6:13,14)
--Noah built an altar and sacrificed of every clean animal and bird. (Gen 8:20)
--Noah and his sons received a new covenant. God blessed Noah: “Be fruitful and multiply, and fill the earth.” God promised never again to destroy the earth with a flood, and gave the sign of the rainbow. (Gen 9:1-17)
--Noah farmed and planted a vineyard.  Sadly, he became drunk and naked, and later cursed his grandson Canaan. (Gen 9:20-27)
Noah’s Prophetic Role
--“But as the days of Noah were, so also will the coming of the son of man be.” (Matt 24:37)
--“For as in the days before the flood, they were eating and drinking, marrying and giving in marriage, until the day that Noah entered the ark,” (Matt 24:38)
--“And as it was in the days of Noah, so it will be also in the days of the Son of Man: they ate, they drank, they married wives, they were given in marriage, until the day that Noah entered the ark, and the flood came and destroyed them all.” (Luke 17:26,27)
Noah’s Importance Today
--The account of Noah’s Ark saving mankind from a worldwide Flood is more than just a compelling story: it is an essential part of the Christian worldview.
--Noah’s account creates a worldview in stark contrast to the atheistic or secular humanist worldview.  This biblical account cannot be reconciled to Darwinian evolution, the scientific model that is foundational to the Secular Humanist and Marxist/ Leninist worldviews. Perhaps that explains why Noah is so vigorously mocked in academic literature, and even caricatured in movies.
Noah’s Boys in the City of Mother Earth was written to offer a fresh look at this old story.  While the book takes considerable literary freedom in describing Noah and his family, its main purpose is to make the real story of Noah, and the biblical worldview, come alive for the modern reader.  After all, what if the Bible were true? 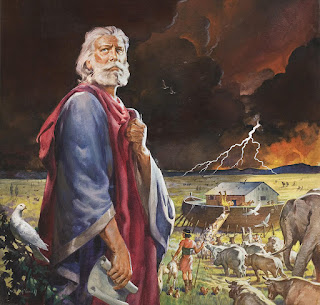