In the basement of the house where I grew up was a room called “the Fruit Cellar.”  White papered shelves on three sides were stacked with glass jars filled with perfectly packed fruits, vegetables and pickles.  Jellies topped with paraffin and scalloped covers were arranged by color and varieties.  (Catsup and relishes had their own spaces.)  On the door side of the room a large stone crock held homemade sauerkraut.  Crocks of corned beef or fat layered fried pork appeared on “inspired” occasions when one or both parents said, “do you remember” or “shall we try to make” a childhood favorite.
And then there was the year when the Hires Root Beer Company advertised their extract on the radio.  “Make Grandma Hire’s Root Beer in your Own Kitchen.”  “For less than a dollar you can make enough for a party.”
“Anyone Can Do It,” they said.  “How Great,” we said.  We had bottles, caps—and we Loved Root Beer!
On a Saturday morning my sister and I were assigned the task of assembling and cleaning materials.  We were also to be the “cappers” with a device that crimped the metal lids onto the bottles.  (It was a two person job: one to hold the bottle in place, the other to put the cap on and operate the sealing lever.)  We eagerly awaited the brew our parents were concocting in the kitchen from tap water, sugary yeast and the extract.  Mother ladled the liquid from the pot through a large funnel into each bottle.  By late afternoon, our work was finished.  Shining brown bottles, enough for a party, were arranged on shelves in the Fruit Cellar.  We were promised a picnic to which we could invite friends, possibly the following Saturday, featuring our very own homemade Root Beer.
The rest of the weekend passed uneventfully.  When we went to bed on Sunday, our thoughts had already turned to activities for school the next day.
Sometime after midnight, we were shaken awake by rattling walls, loud bangs, and we tumbled from our beds to the sharp pings of breaking glass.  Mother screamed, “Burglars, Ollie, Burglars!”  Pop grabbed a large black umbrella from his closet and dashed out into the hall.  Mother had a handful of Hat Pins.  My sister and I were told to get under our beds, but holding tightly to one another’s hands, we followed our parents from room to room, shouting and clicking on lights.
The ear-splitting noises continued.  Now we felt the explosions vibrate under our bare feet.  Something—Somebody—was in the basement.  We paraded down the stairs, growing bolder as each bang was punctuated by the smack of Pop’s umbrella against the wall, and loud squeaks from Mother exhorting us to be quiet.
Suddenly it was quiet.  Too quiet.  Whoever—whatever, was the cause of the terror was probably “lying low.”  The lights showed us something dark—oozing from under the Fruit Cellar door.  A strong smell—Ripe—Feral—filled the air.  Pop slammed open the door, aimed his umbrella, pulled on the light chain, and let out a screech!  Jumping up and down, swearing, blood dripping from his feet, he motioned us to move back.  Broken glass was everywhere.  Sticky brown root beer puddled the floor, dripped from the ceiling, festooned the walls.  The yeast had done its expanding best.  Each bottle had blown its top.  We had Had a bang-up party.  All for less than a dollar, just as the Hires ad had promised. 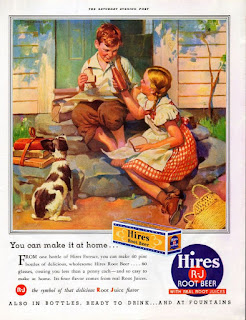 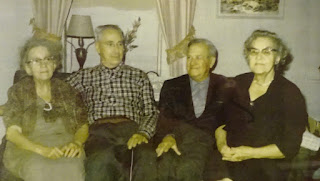