Living with an Artist in the Family: Mom Horning Story #1

August 01, 2019
This month, in honor of our mother's approaching 96th birthday, Noah's Boys is featuring some of her favorite stories.  The stories were written for a Memoirs class about twenty years ago, and they will be of special interest to the Hornings and to our Hajny cousins; but I love her style and sense of humor.  These simple stories offer keen insights of an America that is fast slipping away.


Thinking back, mine was probably not a typical childhood.  Mother was business minded, a disciplinarian, socially acute, a marvelous cook and housekeeper.  Father was an Artist, meaning he was none of the above, with exception of occasional clever, beautiful, tasty desserts.  His paintings were all over our house; many others were in taverns or even in a church or two.  There were few blank spaces on our walls, even in the bathrooms, which at times had the most fanciful, attractive, and surprising art of all.  Sitting in the tub could be an adventure, like being under a Midwestern lake.  Sunfish, bluegills, colorful rock bass and perch swam amidst waving fronds of ‘lake’ weed.  In other panoramas, birds, butterflies, trees, or flowers formed a peaceful bower for the bather.  Once, very, very briefly, nubile nymphs gamboled on a hillside.  Mother had them painted out.

Our yard, with flower and vegetable beds, fountains, and fish pond, was always on the tour for school children in our area.  “Pop” had a green thumb, and much to our embarrassment, the huge blooms and produce were due to his seeking the best possible enrichment for them.  Sunday drives into the country were occasionally punctuated with unexpected and brake-slamming stops when horses were seen, or we came upon a herd of Holsteins quietly chewing their cuds.  Then the burlap bags and shovel were taken from the trunk and Pop crawled under or over fences to retrieve their “bounty.”  How my sister and I hoped none of our friends would view this spectacle.

During the Depression, with no office to go to, Pop did taxidermy.  Birds, fish, deer, and some more exotic beasts were brought limply into the house, and exited in their best forms, to be hung on walls, displayed on shelves, to pose unclad babies on, or to stand menacingly in entryways.  Because of the nature of the craft, I never knew what was cooking on the stove—and sometimes neither did Mother.  (It could be a delightful soup for dinner, or Pop’s bucket of bones.)

The modeling needed in Taxidermy led inevitably to other three dimensional fields.  One of Pop’s interests was making plaster casts of his clay models, and sometimes of living ones—mostly me.  I was the littlest, most curious, and I embraced some of his experimental ideas.  He made molds of my hands and feet.  The foot forms eventually were displayed in shoe stores to explain how shoes should be fitted.  I was less enthused with the Face Mask idea.  When Pop vaselined my face so the plaster would not stick, and got ready to insert straws for breathing into my nostrils, I yelled for Mom and ran from the house.

The next major project was to be a fountain for the pool.  Pop drew the plan, complete with plantings.  The full-sized statue was to show me in overalls, hands on knees, water from pursed lips “fountaining” into a fish filled reflecting pool.  I was almost seven, small for my age, and a bit of a “tomboy.”  He made a wood and wire armature, bought a hundred pounds of modeling clay, and every time he could catch me sitting idly, I posed for him.  A picture showing the finished project and accompanying article was published in the Better Homes and Gardens Magazine.

The statue, eroded by time, now stands in our backyard.  The head was knocked off once in the original move from Wisconsin, and again by mean little kids trying to tip it into the pond on Halloween Eve.  The water channel had been crimped, and birds have stained the cast stone, but little Libby in her bib-overalls stays posed as she did so many years ago, seemingly to watch the gold fish swimming silently in the quiet waters.
Note: Paintings by Alois Marshalek 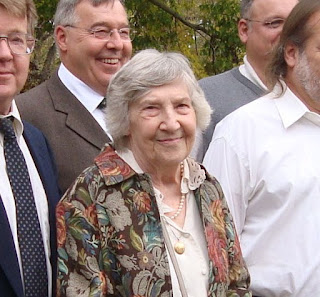 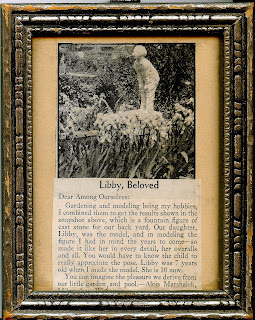 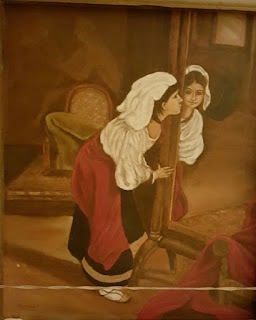 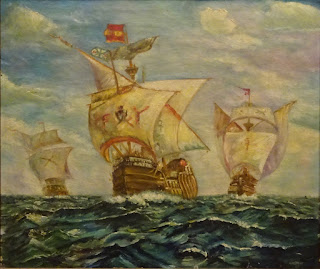