One of the least understood compulsions is the one to “own a pet.”  I have been a pet owner for the many years since I was four or five, and begged and pleaded for a cute little pink pig or the kittens that every farm had in abundance.  I had a kitten, until it got lost when we took it with us to the Lake Cottage, fish of many colors and sizes, and Rabbits.  Lots and lots of Rabbits.

My sister and I had a playhouse in the back of our property.  It was a 2/3rd size house with flowers planted around it and a railed porch.  Inside were child sized toy appliances, tables, chairs, and beds.  Curtains framed the windows and rugs were on the floor.  But even such a structure lost its appeal after a while, and we wanted something ALIVE to play with.  The family next door had a dog, but better than that-they had Baby Cousins.  Little People they could wheel around in prams or pull in toy wagons.  No one seemed to come forth with any of those for us, but one Easter, our Parents surprised us with what were believed to be Sister Rabbits.  The finer points of Biology had not been explained to us, and evidently not even to our parents, because as time went by, the Rabbits discovered for themselves that they were not sisters at all, but Buck and Doe.

The single large hutch we had for them became, after a time, a Nursery.  Wire netting and boards were purchased, and two more cages were assembled and placed on the Playhouse Porch—one for my sister’s Pet, one for my Pobby, and the original hutch for the six offspring.  A large screened yard was built, and the Rabbit Family played in it all day.  At night, for safety, they went to their own quarters.

Somehow, this arrangement did not work out as the humans had intended, for our two original pets kept duplicating themselves.  Our playhouse, now that cooler weather had arrived and winter was not far off, became the Rabbit’s House.  The little stove, icebox, sink and dish cabinets, as well as the rugs and rocking chairs, were given to our cousin Joannie.  Our table was stocked with Pet Food and Grooming Tools, and the make-believe fireplace became the depository for bedding straw.  Being Pet Owners was not at all as we had envisioned it.  Not At All.  –And we were running out of friends who were willing to take home a cuddly furry pet.

Then the mysteries began.  My sister and I discovered that the oldest and biggest of the Babies began escaping.  We found their cages empty in the morning.  One or two rabbits disappeared every week.  Our parents claimed that happened to everyone who raised Rabbits and we should not worry about it.  In fact, the feeding, watering and cleaning out their cages was getting to be a very big job.  We had to tend them before school every morning and as soon as we returned in the afternoon.  A few less each week didn’t bother us at all.  I think we might have even suggested that we were getting tired of the whole responsibility.

Then one Sunday afternoon, while we were visiting our Grandma, Cousin Frank said to my Father, “That sure was a good Hassenpfeffer we had last night.  Thanks, Uncle Ollie (Alie).”

Oh, my!  The gasps, the looks that passed around the room.

“Hassenpfeffer, that’s Rabbit,” my sister cried, as she stared at our Father, and sobbing loudly, ran from the house.

The ride home from Grandma’s was very quiet.  My sister was pale, stoney faced.  She turned away when our parents spoke and her only words to me were the forbidden, “Shut-Up.”

So that’s what happened.  Our Rabbits did Not escape—not by themselves they didn’t.  They were Kidnapped—Snatched.  Someone turned them into Hassenpfeffer.  It’s that tender meat with the sweetish sour brown gravy and dollop of sour cream that goes with the fluffy dumplings we have at Christmas time.  I’d eaten Hassenpfeffer all my life—I liked it—and that’s where it came from.  Rabbits, Pet Rabbits like my Pobby.

There wasn’t much conversation at our house for a couple of days.  Then Mrs. Schaeffer, who had the apple orchard behind our  house, said she’d take my sister’s Pet and most of the others with their hutches.  The rest of the Rabbits left us one by one.  I cried when Pobby went.  He was the last to go.  I think it was—at Christmas time. 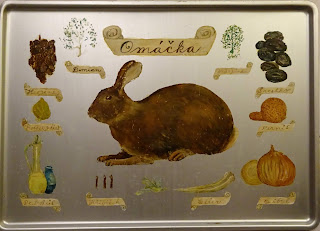 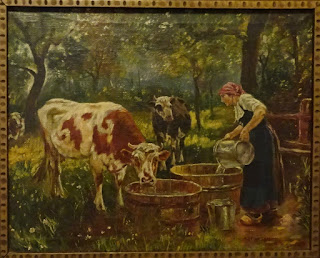